Losers, sleepy eyes, bimbo, dummies, the list goes on and on. I know what you’re thinking; this has to be the childish and petty fodder of a Real Housewives Twitter war. You would be somewhat wrong on that but potentially prophetic. Unfortunately this only cracks the list of insults that now President Trump hurled at reporters and other critics during his campaign, but now that he is our president we get a ring-side seat to a whole new reality show. Or should I say #AlternativeRealityShow?

Let us recap on the last few episodes of RHOTUS, as it has been quite difficult to keep up with all of the dynamics of the show. Our last tweet from President-elect (or Russia’s President-with-Purchase) was a very tasteful photo collage. That’s right, folks, it’s not just for your granddaughter’s Instagram posts anymore! It was so tastefully done that we almost forgot about this lovely tweet from last season’s drama. 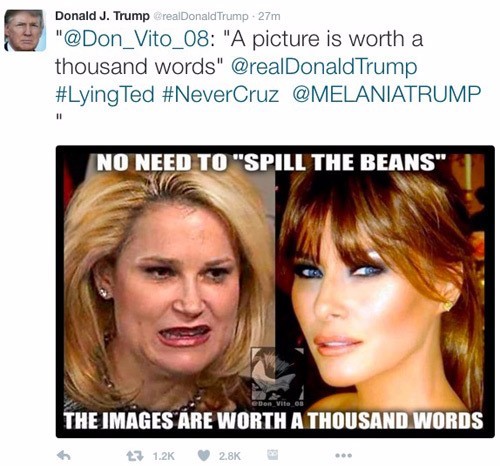 Leading up to his inauguration, his flurry of interviews had all of our heads spinning. Odd that most Housewives have a tendency to throw shade in their interviews and be nice-nasty in their daily lives. Trump, however, has chosen the opposite path which has really enriched his character’s role on the show.

Trump even made a point to thank the brave men and women who serve in our military, in our government, those who work in our intelligence committee…oh wait. He did thank the others but just made sure to tell us how many of his adoring fans were at the CIA headquarters ready to give him “long standing ovations”. It is important to note here that he not only had the opportunity to meet some “amazing people” (not sure if that refers to the people clapping or the people inside the building) but it is equally important to reiterate his epitaph: WIN! Win what, you ask? We’re not sure, America, but we do know that it’s exciting to say really loudly with hundreds of cheering minions – I mean, supporters.

But alas, this more solemn Trump could not even last as long as his daughter’s singing career…forgot about that daughter, didn’t you? However, he did demonstrate some clairvoyant capabilities shortly after his swearing in. Not only was he the only person in America who knew all along that he would win against Hillary Clinton, but he also somehow knew that all of the anti-Trump protesters did NOT vote.

The next episodes were kind of boring, to be honest. Although the photo of Trump’s inauguration crowd actually did two things for us. First, it finally proved that Trump will not refuse the offer of labor from people with complicated names which was a personal thrill considering how odd my own name may sound to many of the Scottish. Secondly, it finally proved to us once and for all that it’s inauguration crowds, not the shortness of a man’s fingers, that we can directly correlate to one’s manhood and that our President will proudly display the evidence his manhood in the White House. Nice try, Graydon Carter, but according to our star of RHOTUS, you’re fired! Although ironically Vanity Fair’s numbers have skyrocketed since Trump’s public flogging of their success and their editor.

Now in the words of our beloved Teresa Guidice from RHONJ, haters are gonna hate. What makes RHOTUS more hardcore than RHONJ is that Trump just love, love, loves to engage with the haters on every level. Not only did Trump take us through the mental gymnastics of trying to prove his crowds and ratings, but he also took us through the insults of civil rights leader, John Lewis, the mental journey toward believing that Breitbart is more factual and less opinionated than any other news outlet, and my personal favorite…the downfall of Meryl Streep’s career that everyone missed but him. 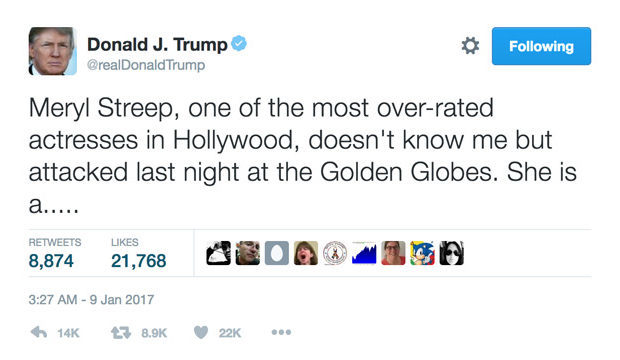 I know that you’re probably thinking that this was in response to a vicious attack, a slander of Kenya Moore proportions. You might be surprised to learn that it was in response to a plea from the Golden Globes stage to be kind people even though we have a not-so-nice man in the Oval Office. Some people may be insulted by this sort of thing, but I think that Meryl should be flattered. Between saving American jobs, making us great again, renegotiating every trade deal that this country has ever signed, destroying ISIS, building a large wall, replacing Obamacare, finding 3 million fraudulent votes, NOT talking to Russians about our business, pissing off North Korea, pissing off China, pissing off Iran, pissing off Australia, and locking up Hillary Clinton, he felt that Meryl Streep was important enough to stop the presses for.

Thanks for recapping these last few episodes, and stay tuned Monday through Sunday, 24 hours a day for our next episode of #RHOTUS.